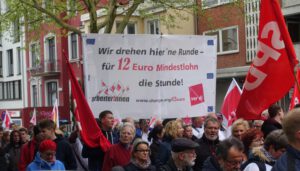 Interesting podcast (more here: https://www.etui.org/Podcasts). I quote from an email I recently received:

“The ETUI has recently launched a new service etui.podcast, voices on the world of work.

etui.podcasts offer new perspectives, debates and conversations about ongoing research and education on social Europe, worker participation, health and safety, the wider labour movement and the world of work.

This is an interesting project. Here is an exerpt of a newsletter I received with the most important information. More see here: http://suniproject.adapt.it/

„Started in January 2018, the final stage of the SUNI (Smart Unions for New Industry) is now approaching. Thanks to co-funding from the European Commission, three metalworkers’ organisations and four research institutes from Germany, Italy, Spain and Sweden, have teamed up over the past 18 months to deepen the role of trade unions in relation to Industry 4.0 and gain expertise within the union context.“

“Nobody has a crystal ball to look into the digital future and there is no such thing as technological determinism related to digitalisation» (ETUC, 2016). Workers’ representatives are therefore urged to take action to collectively and sustainably shape the future of work.”

„The structure of SUNI is built upon 3 main work streams:

This infographic is intended to sum up the main results of this project.“