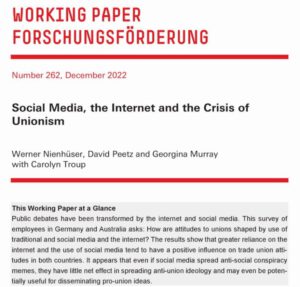 “Public debates have been transformed by the internet and social media. This survey of employees in Germany and Australia asks: How are attitudes to unions shaped by use of traditional and social media and the internet? The results show that greater reliance on the internet and the use of social media tend to have a positive influence on trade union attitudes in both countries. It appears that even if social media spread anti-social conspiracy memes, they have little net effect in spreading anti-union ideology and may even be potentially useful for disseminating pro-union ideas.”