We follow a T-shirt’s supply chain from Burkina Faso to Bangladesh to your local mall—and back again. .. 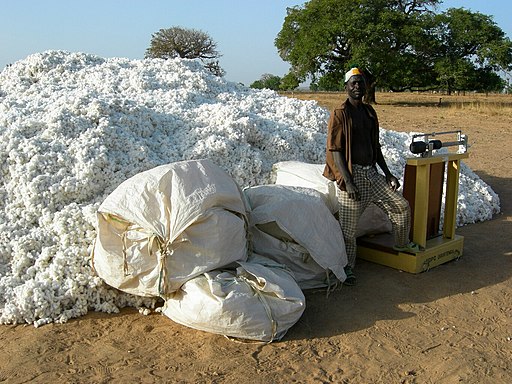 The history of cotton is tightly braided into the history of Western capitalism. A major thread of the British Empire, the crop helped weave the efficient and ruthless structures of today’s globalized economy. The T-shirts we buy at retailers like Gap and H&M may feel far removed from the bloody past of a crop synonymous in

the 19th century with slavery and sweatshops. But when one follows the global supply chain of cotton growers, workers, traders and factory owners, it becomes increasingly apparent that capitalism has not, in fact, traveled far at all from its bloody origins.

Cotton is a flexible crop. It will grow anywhere rain is plentiful and temperatures remain above freezing for at least 200 days a year. Archaeological records show that humans have cultivated it for millennia in Africa, India, Central America and South America. As early as the 7th-century B.C.E., Herodotus described the army of Xerxes I of Persia wearing clothes of exceptional beauty “made of wool that grew on trees.”

Europe was late to the game, relying on linen, flax, silk and wool through much of the Renaissance. When the English India Company brought cheap and colorful calico and chitz to Britain in the second half of the 17th century, they were an instant hit. Europeans loved that the lively colors didn’t fade with the first washing.

To squash this new competition, European textile producers used all kinds of leverage against the Indian cotton industry. France outlawed cotton entirely in 1686; England passed a partial ban on Indian cotton in 1701 and a stricter ban in 1721; Spain, Prussia and other nations followed suit with various restrictions.

Businessmen eventually saw an opportunity for profit, however, and began building a European cotton industry grounded in colonialism and slavery. The cheap cotton harvested by enslaved people in North America allowed Britain to undercut India’s prices. According to historian Gene Dattel, Britain was importing 1.2 billion pounds of cotton annually from North America by 1860. Nearly 1 million workers in Britain’s mills and factories rendered the cotton into garments that made up 40 percent of national exports.

“Cotton,” writes Dattel in Cotton and Race in the Making of America, “was the single most important contributor to Britain’s economic power and its rise to preeminence as a world empire.” Cotton became a springboard for the Industrial Revolution, and for a global economy that favored limitless accumulation of capital.

Today, cotton crops occupy about 2.5 percent of the world’s arable land. The industry is the primary source of income for hundreds of millions of farmers and factory workers. That income is typically meager, however. Cotton workers are the perennial losers in a global race to the bottom. Multinational clothing companies seek out the cheapest textile manufacturing hubs. Factories, in turn, buy the cheapest cotton they can find. Any added expenses, including higher wages, may prompt buyers to flee to ever-cheaper factories—sometimes leaving entire national economies in tatters.

In These Times followed the cotton life cycle from the fields of Burkina Faso to the factories of Bangladesh to the sales racks of Slovenia. Along the way, we spoke with the people who make the shirts, jeans and countless other items you wear every day, to understand the real wages of cotton…”

Source: Quote from: Meta Krese, Photography by Jošt Franko: Our Cotton Colonies. In: In These Times, April | March 20, 2017; http://inthesetimes.com/features/cotton_manufacturing_labor_exploitation.html, 27.3.2017